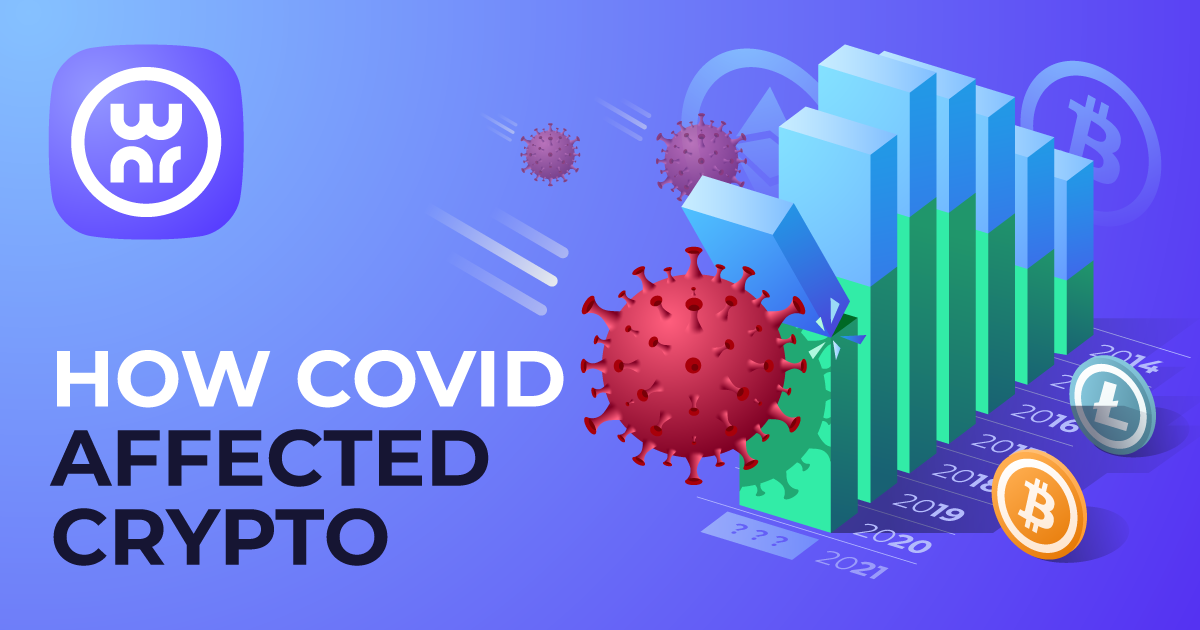 Crypto & Crises: How coronavirus boosts digitalization of the economy

The 2020 COVID-19 crisis has been unanimously named the biggest one since the Great Depression, which means it beats all the Black Mondays, Tuesdays and other weekdays in 2008 and 2014 when we saw the financial markets crash and currencies completely lose their ground. The economies are in for a long recession, but what about bitcoin and other cryptocurrencies? How are they handling this?

First, let’s take a quick track down the memory lane. As we know, bitcoin is a crisis baby in a way. It was created amidst the debris of the 2008 global economic crisis and since then, its rises and falls have been tumultuous. Cryptocurrency the market is considered to have one of the highest volatilities in the financial world. Sometimes it seems like every little swing of financial ether changes bitcoin’s course. And yet, when we look at the stats, we see that bitcoin and other major cryptos are doing much better than expected in the COVID-ruled world.

Bitcoin, of course, has lost some points, going down from almost $10K in February to a little over $5K in mid-March, all that after a tentative steady rise of a few previous months. But this is nowhere near the swings it experienced in 2017, besides, it went up quickly enough, reflecting that it’s fall was only caused by initial scare. It is now at around $9K and is very far from its historical low of 2018, marked by the pop of the ICO bubble.

But why this stability? One would expect the most volatile market to show some feats. Let’s take a look at what’s been happening with the global economy during the lockdown. In short, the biggest economic change of the lockdown is that it has forced industries, companies and individuals to go online, large scale. COVID-19 crisis has created a steep rise in demand for online services and online available goods. It has boosted online shopping and delivery, a huge rise of various online-oriented businesses, such as online courses, and education, and online marketing. A lot of companies, especially the small businesses who have been offline for decades and didn’t really feel the need to go online, had to go digital to survive. Surprisingly, many of them report an actual up.

For instance, a yoga teacher from France, who had a small studio, which, of course, had to be closed, started doing online Yoga marathons over Instagram, accepting donations in euro and in bitcoin, soon discovered that her audience is much broader than just locals who used to visit her studio. She reports having customers from other countries even, and other time zones, thus having to adjust schedule to fit the growing demand. She set up a bitcoin wallet to accept payment from people who live elsewhere and to save on bank and conversion fees. At the same time, her yoga lettons became available to people who live in remote places with no yoga studio in sight.

This is an individual perspective, but something similar can be observed on the macro level. Governments throughout the world are taking measures and creating programs to support nation-wide and world-wide digitalization. Several surveys show that in Europe, where many businesses received financial aid from the government to cover rent and salaries, a hefty amount of that money was also spent on launching online promotion and converting services from offline to online. According to Veon, a large telecom holding which unites several European largest mobile operators, the COVID-19 crisis has sped up the digitalization of the economy in Europe by almost 10 times.

All this has led to imminent growth of online sales and transactions, which once again brought attention to cryptocurrency as a safe and simple means of international, borderless and trustless exchange. Which, in turn, supports high levels of investor interest in Bitcoin and other popular altcoins, providing for a steady growth and a rather firm position in the market in the middle of the COVID crisis.

The paradox here is that it’s the famed volatility of bitcoin that makes it only more attractive for avid market players in times of a crisis. When stocks fall and large companies are losing income and positions on the market, bitcoin becomes a great chance to earn money when everywhere else money is being lost. Those who short-term invested in bitcoin mid-March, after it’s somewhat dramatic fall, can prove that gaining almost 100% profit over the course of just a few months is possible.

Thus, even though the world markets around are in chaos, cryptocurrencies not only do stay afloat, but demonstrate a development spike we haven’t seen since the ICO bubble.