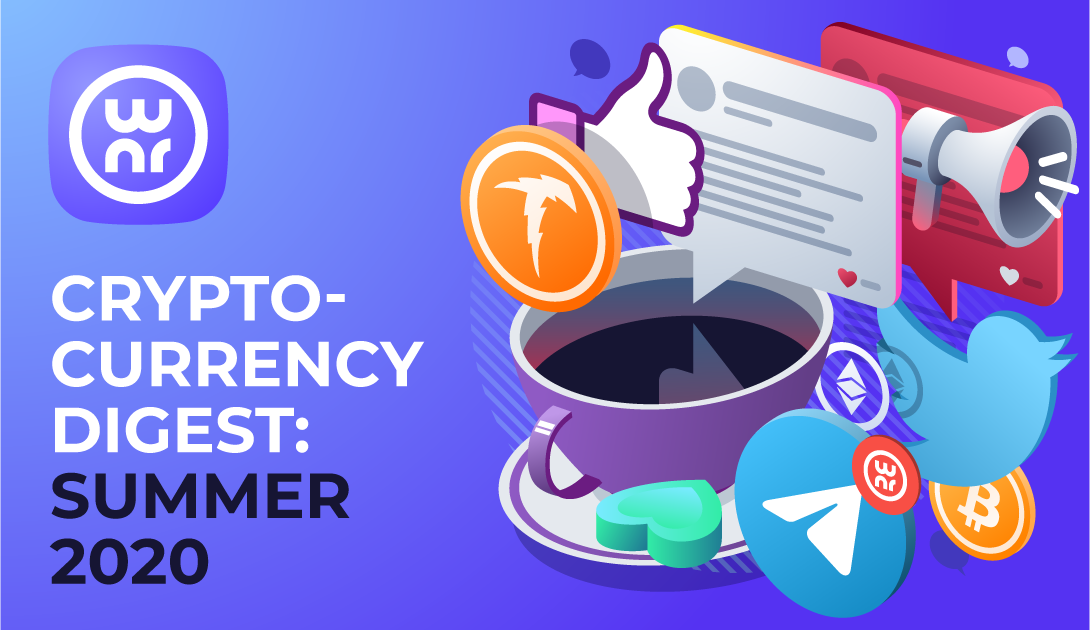 This summer has seen a lot of development in the blockchain and cryptocurrency sphere. Let’s check out some of the notable notable cryptomarket news and highlights of the past three months.

Bitcoin value rollercoaster. Markets saw BTC price dramatically rise this July, a hop largely attributed to the rise of gold prices. After its even more dramatic fall in April, when it went down to a little less than $5,000, bitcoin skyrocketed to over $12,000. Analysts predict that liquidity increase performed by world’s central banks for gold and bitcoin prices may result to BTC hitting even higher records within the next 24 months.

Ethereum gas hits all-time record high. Gas is the colloquial name for a fee users have to pay for doing anything with ETH. Ethereum has experienced a surge of activity this summer. It is partly connected with the rise of DeFi tokens based off its network, which led to marketplaces raising their transaction fees and miners increasing their collective effort. The total amount of gas spent daily on Ethereum network during this summer hit numbers as high as a whooping $15M. But this may also be the sunset of the airdrop era: the airdrops are becoming too expensive.

DeFi hype. Decentralized finance or DeFi and dApps have been the news this summer, showing unbelievable growth. The DeFi market has grown from just $675M in the beginning of the year to $7B in August, according to Defipulse.com. A new Ethereum-based DeFi coin, YFI grew a mindblowing 100,000 % in just a week after its launch in July. By the end of August, it cost $32,000. Three times more expensive than BTC, YFI is now the most expensive token in the world. For the first time, a DeFi marketplace, Uniswap exceeded Coinbase in trading volume during the last weekend of this summer. Many see the DeFi hype as something akin to an ICO bubble, yet overblown even more.

BMW and VeChain’s VerifyCar. Although rumoured for a long time, it is now that a blockchain dApp VerifyCar, made by the German automobile giant and VeChain is coming into the world. Users will be able to get verified data about mileage, repairs and accidents. It will also help prevent tampering with data when reselling used cars, especially changing the mileage and thus help with price speculation. BMW states that data manipulation costs as much as 3,000 EUR per car.

RIP TON. After Telegram announced in July that it would drop the support of TON Testnet, it sounded like a finale. Although independent TON-based projects continue on, the likelihood that the largest and loudest ICO project of all time will see the light of day is non-existent as of now, especially considering that Telegram is to return $1.2B to investors in settlements after SEC charges.

Twitter hack attack We are all used to seeing eccentric messages on Elon Musk’s twitter profile, but when over 130 verified celebrity accs, including Elon, started posting about doubling BTC payments, sent to certain addresses one day in July, Twitter knew something was off. Before the accounts were suspended, however, many users sent BTC to hackers’ accounts. In an attack as blatant as it was high-profile, it’s estimated that over $120K was stolen from over 350 BTC wallets.

Tesla stocks skyrocketing. In early June, Tesla saw their stocks rise dramatically to beat Bitcoin market capitalization. The rise is attributed to the general after-COVID rejuvenation of the markets. Tesla’s announcement of its auto sales largely exceeding the Wall Street prognosis and the launch of the semi-trailer truck have also fueled the stocks.