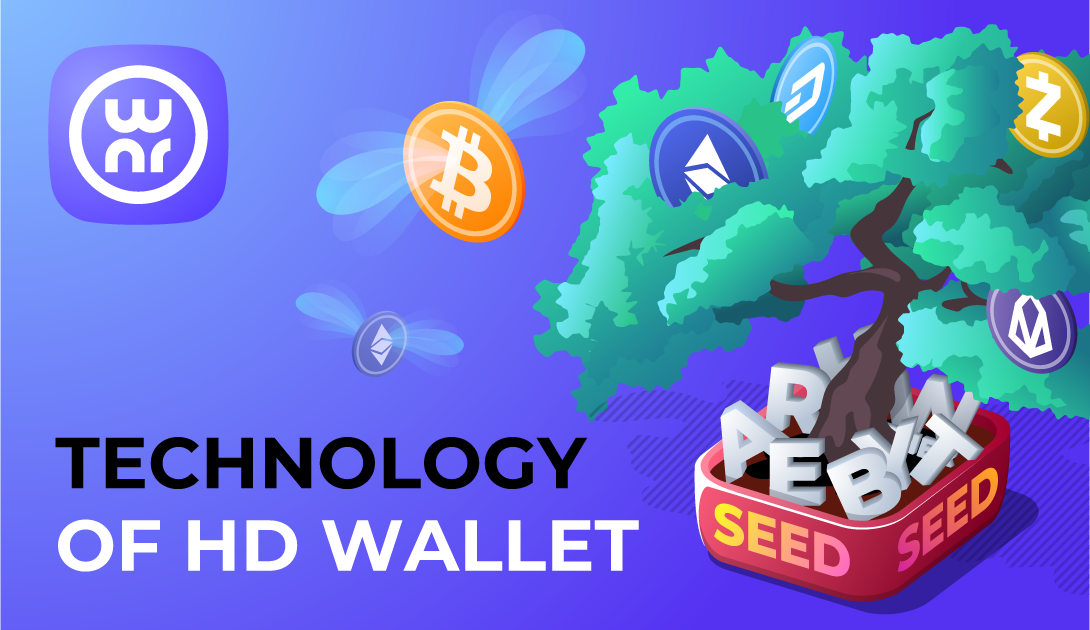 The origins of HD wallets Cryptocurrency tech is developing so fast, that apps and algorithms we used only a few years back seem outrageously outdated now. It is probably hard to imagine for many bitcoin users today, that there used to be a time when people had to make do with simple crypto wallets that were not HD wallets. Hierarchical deterministic wallets practically dominate the cryptocurrency scene. Let’s take a look at the issues that have predetermined their quick rise and spread.

This is a bit hard to encompass now, but only a few years back, users had to manually create a new address for their transaction and back up each previous pair of a private key and a public address. This greatly took away from bitcoin’s and similar cryptos’ fluidity because keeping track of your backups, especially when you make transactions often, is a hardship. One wrong step here, a miswritten combo, and your coins can be lost to the wind. People came up with numerous tracking systems, to no avail. People used the same addresses for multiple transactions, which led to many hacks and privacy breaches because when several transactions can be attributed to the same address, it’s much easier to disclose the sender’s identity and to perform a personalized attack.

Eventually, this became a huge issue and a solution was offered in the form of an HD wallet. In short, what an HD wallet does is it rids you of the necessity to keep track of transaction backups. How does it do it? Each pair of a private key and a public address gets a seed phrase attached to it, so the wallet can restore the information for each transaction using this seed phrase. And, this seed phrase becomes the only thing you, as a user, need to hold on to and keep safe. Much simpler from the handling point of view, right? And at the same time, technology-wise, it doesn’t take one bit from the security, because each transaction still gets a new pair of key and address.

The first HD wallets were introduced with BIP 32 in 2011 and afterward improved with BIP 44.

For starters, let’s take a look at the terminology. Fun fact, more than half of people who actually use HD wallets think that HD stunts for High Definition, like a picture resolution. This is not so. In HD wallet HD actually is an abbreviation for Hierarchical Deterministic. But exactly what does it mean in terms of a cryptocurrency wallet? The word ‘hierarchical’ in terms of a crypto wallet means that all cryptocurrency addresses are connected with each other in a derivative way. You can derive addresses using a seed phrase and from each other. HD wallets have a tree structure where a seed phrase is at the root of it. The word ‘deterministic’ in this case describes a system that always presents a predictable or determined result. It’s a system where the same input will always produce the same output.

So, how does all this work?

A regular cryptocurrency wallet is nothing more than a public address and a private key the combination of which opens up access to your coins. This would probably be okay if you just owned a fixed amount of a single type of cryptocurrency and did absolutely nothing with it. But the fact is, cryptocurrency is very fluid and if you want to get profit, you will have to make transactions, send it and receive it. Each transaction means a new pair of a public address and a private key. You can imagine how fast you can become piled up under the number of these combos once your transactions begin to mount.

An HD wallet is the solution to this problem. With it, you no longer have to manage all your address/key combinations as they become integrated into a tree system of the wallet. And there’s practically no limit to how big this tree can be. The most important thing is the root of it, or the seed phrase, which unlocks access to the entire tree.

Why is this good for you?

First, Captain Obvious here, it’s much easier to maintain a single root phrase. Usually it’s 12 random words, but some wallets, such as OWNR, offer other word quantities and you can also choose one of several available languages. This also is a large step up in security. Another great advantage is you no longer have to lose time waiting for each set of public addresses and the key to generate. HD wallets also provide backup for your info so that it is much easier to retrieve it when you need it. Moreover, backup for a tree structure is much simpler than backing up arrays of random, unconnected numbers. It decreases number of cases when transaction info can be lost because of faulty backups. In fact, you can do it without backup in a traditional send, because the seed phrase is the only thing you need to hold on to.