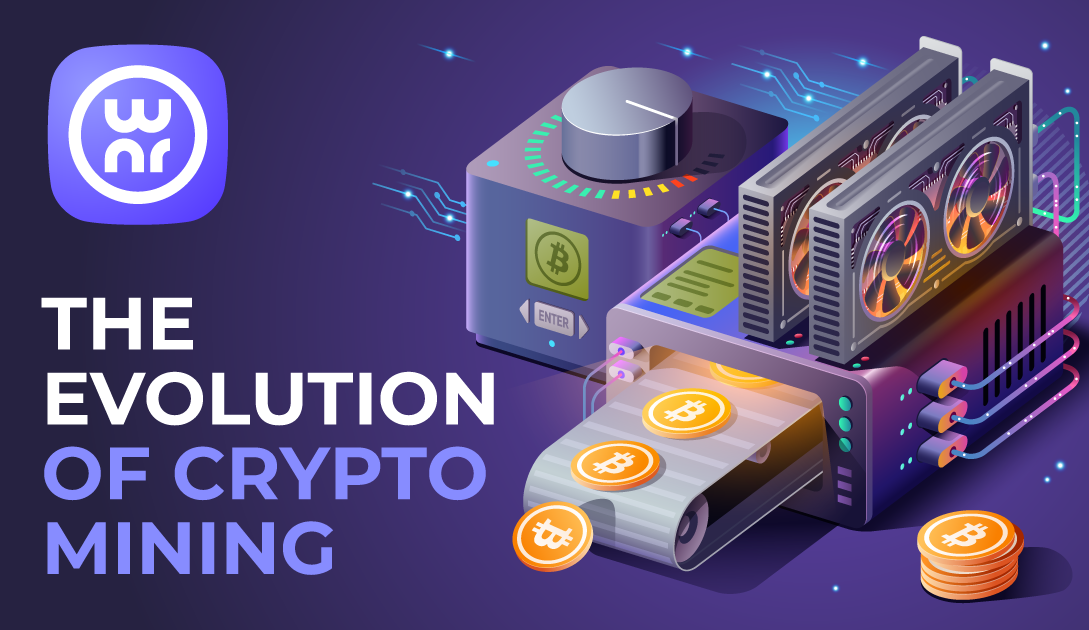 The evolution of CRYPTO MINING

Everyone knows that most cryptocurrencies are mined to make more of it. But how many people know how mining works? We’ll take you through the history of crypto mining, how it all began, how it works, and most importantly, address some issues and controversies surrounding crypto mining.

Most cryptocurrencies have inherited their mining design from Bitcoin. But did you know that the creator of Bitcoin, Satoshi Nakamoto, actually adapted his classic SHA256 Proof-of-Work (PoW) mining algorithm from an obscure method called “hashcash”?

Hashcash is a method for creating Proof-of-Works that was invented by Adam Back. It creates a computationally hard math problem for nodes to solve in order to create a block that will be accepted by the rest of the network. The solution to the problem is embedded inside the created block and is called a Proof-of-Work (PoW).

Since computers are efficient at accurately performing hash functions, these are usually the computational problems that are used in PoW algorithm. The result of the hash function is supposed to be under a specific value. As the maximum allowed result is lowered, mining becomes more difficult because many more iterations are required, which takes up time and energy.

Some of the hash functions that are used by different cryptos’ Proof of Work mining algorithms are:

When a block is solved, the person who solves it gets rewarded some cryptocurrency for contributing the computational effort to the network.

The evolution of crypto mining

At first, mining was performed using CPUs – the processors that are inside personal computers. But over time, some people have figured out how to port the mining algorithms to GPUs. Since a GPU is much faster than a CPU at performing multi-threaded tasks, this has resulted in greater mining performance.

In order to keep the network secure, the consensus rules of a cryptocurrency usually increase the mining difficulty by lowering the maximum allowed result of the hash function used. This means that it still takes the same time to generate blocks as it did with CPUs, and it helps prevent inflation.

Eventually, Bitmain founder Jihan Wu designed the first ASIC for Bitcoin mining. An ASIC is a specialized processor that can only compute Proof of Works, and can’t do any other calculation. Bitmain went on to make ASICs for other cryptocurrencies as well. For most cryptos, ASICs are several dozen times faster than GPUs.

As the ASIC mining industry continues to grow, new research discoveries have been made to massively increase the speed of these ASICs. The result is that the Proof of Works now take too long to solve on CPUs, GPUs, and even older ASICs. In other words, the mining difficulty has become too high for these devices to mine crypto.

What is the controversy surrounding crypto mining?

An increasing number of people are voicing concerns that because the ASIC miners use enormous amounts of energy, they are polluting the environment in a world that is battling climate change. As a result, some cryptocurrencies are using alternative mining algorithms.

The most prominent of these algorithms is Proof of Stake (PoS). In this model, the larger amount of coin you own, the higher the chance you will get a crypto reward. Because there is no hash function used like in proof of work, it does not have the energy usage problems of Proof of Work. Ethereum 2.0 is a notable example of a cryptocurrency that will use the PoS mining algorithm.